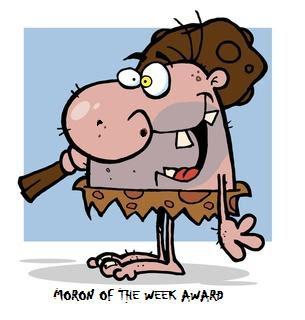 Congratulations Mike, any of the following would have done. But I suppose having so much proficiency at being a Moron you have heaps of moronship to spare which you do so generously without a thought for the sane - a true introverted sign of moronism.

Over on the JFRB thread I have had to repeat that testimony from David Bain's aunt about him mentioning to her that he was wearing his mother's glasses I don't know how many times,some people just don't seem to be able to accept that.

Here, we see Stockdale at his moronish best, struggling with the most basic of things. Well Mike, David's Aunt (later to be beneficiary of Robin and Margaret's will) claiming that David 'mentioned' to her that he was wearing his mother's glasses is different to the evidence he gave, where he said he hadn't worn them that weekend. Of course most people realise that wearing glasses without lens is of no benefit and those glasses when recovered had no lens at all, and the lens (one, recovered 'after hours' by an officer who was not involved in the manual scene search, was dusty and found under clothes. There was no blood on that first lens or the second despite Stephen's room having a lot of blood spray.) So people are entitled to make up their own minds - just as the Jury did. You say 'some people just don't seem to be able to accept that' seldom do you ever say anything that's true, but here you have. Some people don't accept it for very good reasons, you want them to accept it so as to justify your lies about David and your intention to persecute him. I don't need glasses to see that Mike, the fact that you are unable to grasp things in their wider context (rather than what you want or hope for) shows exactly why you are a Moron. Keep it up.

And here's another humdinger from you Mike, it's called 'where the bullet didn't come from.'

David Bain then leaves the alcove and goes into the lounge.He carries out a safe unloading procedure which would include removing the magazine and pulling the bolt back.If there was a round in the chamber it would be ejected.That is why that bullet is on the floor of the lounge.Simple as.


Later, when he has 'discovered' the rifle had a live round in the chamber when found Mike re-explains...

David Bain was hardly likely to eject a live round from the magazine that was in the rifle,was he?I doubt that even his defence team would have been able to explain how a dead man could clear the rifle.

I'm beginning to learn that a fundamental attribute of a Moron is to never admit a mistake. A person who isn't a Moron would realise that it's better to acknowledge a mistake and move on because if you pretend otherwise, or choose to ignore it - you come across as a Moron - just like Mike. Good work Mike, it's so effortless for you that you must drive the other Moron hangbainers green with envy.
Posted by Nostalgia-NZ at 4:42 PM

Email ThisBlogThis!Share to TwitterShare to FacebookShare to Pinterest
Labels: Moronship